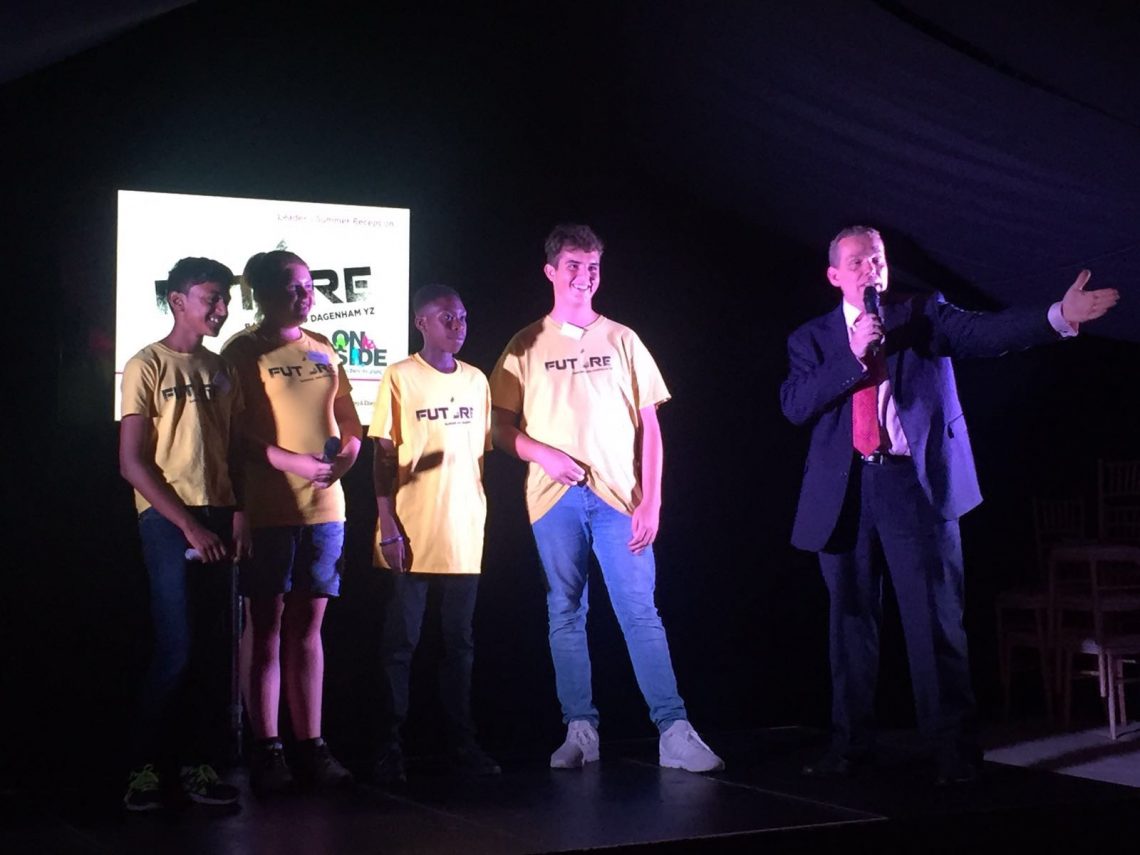 Young people from Barking and Dagenham spoke with pride as they told guests at Council Leader Darren Rodwell’s summer reception about plans for Future Youth Zone.

The group, which has been meeting regularly for the past 18 months, answered questions from Cllr Rodwell in front of an audience of some of the borough’s most notable people.

Barking and Dagenham will be home to London’s first OnSide Youth Zone when it opens its doors in two years’ time. It was given the brand name of ‘Future’ after a vote was taken across the borough with young people making their voices heard.

The Barking and Dagenham development group took to the stage last Thursday evening at Valance House to talk about the work they’ve been doing and explain what the Youth Zone will have in store for those aged between eight and 19 and those up to 25 with disabilities.

After having his questions answered, Cllr Rodwell said: “Anyone who knows me knows I am proud of this borough and the young people.

“It’s amazing to see what the young people are now leading on and Future Youth Zone is a great example. It’s the first in London and that just shows that we are showing London how to do things.

“I’m always inspired with their honesty, with their integrity and their leadership. It helps me understand where we need to go as the borough’s leader but also as a servant to young people and the wider community.

“The size the Youth Zone is going to be and the impact it will have will be second to none.”

Barking and Dagenham development group member, fifteen-year-old Sid Poust, was one of the young people to answer Cllr Rodwell’s questions.

He said: “It was a really good night. I was explaining to Cllr Rodwell about the processes of the logo creation, the motto we’ve come up with, the building and the finances.

While young people across Barking and Dagenham add their invaluable input, work behind the scenes at Onside is rapidly progressing.

Future Youth Zone has a proposed opening date in the late summer of 2018. A detailed planning application for the building, which will be located in Parsloes Park opposite Porters Avenue Health Centre, will be submitted by the end of the year.

Once that is approved, work will begin on the £6m facility, with Barking and Dagenham Council supplying £3million of the capital and the Queen’s Trust and the Jack Petchey Foundation contributing £1.5million each.

Rob Carter, deputy chief executive at OnSide, said: “These are very exciting times for the young people of Barking and Dagenham.

“We are entering a very important part of our planning process and we are very happy with how things are progressing. Some of the young people from the local development group joined us at a recent architects’ design workshop and we were delighted with their input and ideas as to how they wanted their Youth Zone to look.”